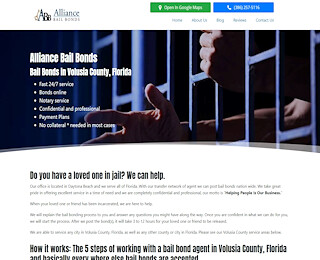 Most individuals who get arrested for a crime are usually released from custody to await trial by posting bail. Bail is the money given to the court to make sure that the defendant returns for their scheduled court sessions. The cost of bail will depend on different factors such as the crime, defendant, and jurisdiction. For instance, if the defendant is seen as a danger to the community or a flight risk, the bail will be higher. Bail cost will also depend on whether the defendant has a bail bondsman.

At Alliance Bail Bonds, we’re the best bail bond company in Volusia County. If someone you're concerned about is in jail and you need a reliable company for bail bonds in Daytona Beach, we're here for you. We'll help you get your relative or friend out of jail as soon as possible.

How Much Does A Bail Bonds Company Cost?

A bail bondsman usually charges a premium of 10 percent of the entire bail amount decided by the courts. Any bail bonds company is regulated by the Florida Department of Financial Services and is required to charge 15 percent on federal bonds and 10 percent on state bonds. This money is non-refundable. There are other potential costs associated with the Daytona Beach bail bonds such as:

In case you change your mind about co-signing a bail bond within 24 hours, there will be a lot of time and paperwork involved in switching co-signers. While this fee may be waived under special circumstances, expect to be charged a minimum of $ 100 for the switching process.

Normally, a bail bondsman is willing to meet clients at the jail to post bail. If your bondsman has to travel at a late hour, over the weekend, or to a different county, they may charge a travel fee.

Today, many bonding companies take credit card payments. But the cost of accepting such payments is still high that it’s often passed to the consumer. The fee can range from 3.5 percent to 5 percent.

Posting bail for someone isn't a small undertaking. The decision needs to be made after serious deliberation. If, for whatever reason, you decide that it's not in your best interests, you can revoke the bond. However, that'll come at the cost of 10-15 percent of the full charge if the bondsman allows it. That's because the bondsman will have to re-do the entire workload.

If a particular defendant or bond is a high risk, the bondsman might need the person to go for frequent check-ins for the entire duration of the trial. The check-ins may come at a fee to make sure that someone is there to meet the defendant when the bondsman isn’t available.

It’s a criminal offense not to appear in court. The repercussions might include the court issuing your warrant of arrest and your bond being revoked. Some bondsmen include a failure to appear fee in the agreement you sign to recover additional costs.

At Alliance Bail Bonds, we offer cheap bail and posting services to people who have been arrested. We know that is a delicate space to be in, and we genuinely care about our clients. We have the experience as well as the skills to get your loved one out of jail. For bail bonds in Daytona Beach, call us now on 386-257-5116 or online.

We welcome your comments!